Two Paths for Faster Appeals at PTAB – One for All Applicants; the Other for Small Entities
11.23.2015
Posted in Patents, Rules and Regulations

Earlier this fall the United States Patent and Trademark Office (USPTO) announced the “Streamlined, Expedited Patent Appeal Pilot for Small Entities” program (the Streamlined, Expedited program), which allows small and micro entities to expedite a single ex parte patent appeal pending before the Patent Trial and Appeal Board (Board). In order to take advantage of this program, a patent applicant must: 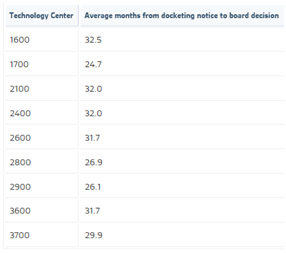 Applicants who enter this program will be accorded “special status” on appeal, which will result in a faster review and ruling by the Board. The goal of the USPTO through this latest pilot program is to have the Board render a decision on appeal accorded special status within six months from the date of filing the petition. This time period is five times faster than normal appeals, which, as illustrated by the chart to the right, have an average pendency of approximately 30 months. This program is slated to run until 2000 appeals have been accorded special status under the program, or until September 16, 2016, whichever occurs earlier. The Federal Register announcement for the Streamlined, Expedited program can be found here.

The Streamlined, Expedited program piggy backs on the Expedited Patent Appeal Pilot program (the Expedited program) announced by the USPTO this past summer. Under this earlier program, appellants can have an ex parte patent appeal accorded special status if another application or ex parte reexamination with an ex parte appeal that was also pending before the Board is withdrawn by the appellant. This option is sometimes referred to as a “bump and dump” option since the priority of one appeal is bumped forward in exchange for dumping another appeal altogether. There is no requirement that the appellant be a small or micro entity for the Expedited program. Additionally, appellants can file a continuation or divisional application to preserve their rights in the application being “dumped.”

In order to take advantage of the Expedited program, a patent applicant must:

Patent applicants of any entity size should review their patent portfolios to determine if they have certain appeals they might be willing to dump in favor of another. Further, patent applicants that qualify as small or micro entities should review their patent portfolios to see if they have only a single ex parte patent appeal pending to determine if the Streamlined, Expedited program is a meaningful option for them to obtain a patent, or at least a decision on a patent appeal, more quickly.