Racketeering Not Just for Mobsters Anymore: Patent Proceedings Too
By Emmanuel D. Filandrianos on 03.19.2019
Posted in Litigation, Patents, Rules and Regulations 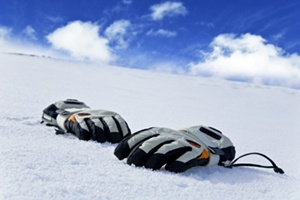 What began as a run-of-the-mill patent lawsuit for a popular sportswear company spiraled into a six year litigation war; one that, when the dust of the suit at law settled, resulted in accusations of “racketeering.”

The story begins with Columbia Sportswear Co. (“Columbia”) filing suit against Seirus Innovative Accessories (“Seirus”) for patent infringement of its popular Omni-Heat® heat-reflective lining technology. This technology for outdoor sporting gear is protected by US design and utility patents to Columbia: US D657,093, US 8,424,119, and US 8,453,270.

Frequently, defendants in a patent infringement lawsuit will make a strategic decision to file a petition for Inter Partes Review (“IPR”) challenging the validity of the asserted patents in front of the United States Patent and Trademark Office (“USPTO”) in parallel with federal district court litigation. IPR proceedings have generally been more favorable to patent challengers than federal court, with the additional upside of considerable cost savings and expediency. Furthermore, the federal district court will frequently stay litigation pending the resolution of the IPR. Thus, successful IPR can effectively carry the day without the need for expensive and time-consuming district court litigation.

It would have been no surprise then if Seirus had filed a petition requesting institution of an IPR. Unfortunately for Seirus, it did not file a petition for IPR within the one-year deadline from the date they were served with a complaint alleging patent infringement.1 Having missed that date, Seirus effectively tied their hands and was committed to fighting the patent infringement suit in federal district court. Conveniently, Ventex—who supplied Seirus’s infringing “Heatwave” fabric—filed two IPRs challenging the validity of the Omni-Heat utility patents after the one-year deadline had passed.2

The USPTO prevents defendants from circumnavigating the one-year deadline by applying the one-year deadline to associated or hired third parties that would otherwise file IPRs essentially as a strawman. This extended application of the rule makes sense because it : (1) ensures that third parties who have sufficiently close relationships with IPR petitioners are bound by the outcome of instituted IPRs; and (2) safeguards patent owners from having to defend their patents against belated administrative attacks by related parties. However, it can be difficult to know where to draw the line, as third parties may have their own bona fide reasons for filing a petition for IPR, even if they do have some connection to a defendant in a related patent infringement lawsuit. Furthermore, a final written decision by the PTAB resulting from an IPR has real consequences for these so-called real parties-in-interest, as they are stopped from challenging the validity of a patent on any ground the petitioner in the IPR “raised or reasonably could have raised.” For that reason, the USPTO regulations require that every petitioner for an IPR identify all real parties in interest.

Columbia’s position in this case was that Ventex should qualify as a real party-in-interest because of its close relationship with Seirus, and that the IPRs should be dismissed pursuant to Ventex’s failure to identify Seirus as such. The USPTO has recognized that whether a non-party must be identified in a proceeding as a real party-in-interest or a privy is a “highly fact-dependent question,” and that “[s]uch questions will be handled by the Office on a case-by-case basis taking into consideration how courts have viewed [those] terms."3 The Court of Appeals for the Federal Circuit has conceded that determining “whether a non-party is a ‘real party in interest’ demands a flexible approach that takes into account both equitable and practical considerations, with an eye toward determining whether the non-party is a clear beneficiary that has a preexisting, established relationship with the petitioner.” Applying that standard to the situation at hand, the PTAB ultimately found that Seirus was a real party-in-interest, and that the IPRs should be dismissed.

In its decision, the PTAB particularly focused on: (1) a supplier agreement requiring Ventex to indemnify Seirus for any claims or liabilities which arise from Ventex’s failure to perform its obligation; and (2) an exclusive manufacturing agreement requiring that Ventex agrees to exclusively manufacture “Heatwave” material for Seirus in exchange for payment of an exclusivity fee. The exclusivity fee was especially suspect, and ultimately was the basis for Columbia’s accusations of racketeering along with a newly-filed lawsuit requesting recovery of legal fees in addition to $20M in punitive damages.

The PTAB noted that the exclusivity fee payments coincided with first payments to Ventex’s attorneys for the IPRs. Additionally, the exclusivity agreement was seen as superfluous, as the earlier supplier agreement already prevented Ventex from selling to Seirus competitors. Finally, an internal Ventex e-mail further linked the surcharge fees from Seirus as necessary to cover the attorneys’ fees for the IPRs.

Whether or not there was any actual conspiracy is yet to be determined, and is the subject of a newly filed racketeering suit by Columbia naming Ventex and Seirus as defendants. Regardless, prospective IPR petitioners would be wise to monitor patent litigation activity of suppliers and related parties to avoid unintentionally being estopped as a real party-in-interest.