Patent Holders, Protect Your IP with These Tips on Patent Term Adjustment
06.25.2019
Posted in Litigation, Patents, Rules and Regulations

The importance of patent term, or the period of time during which the exclusive nature of a patent is in effect, cannot be overstated. The patent term for an issued patent, which is currently set at 20 years from the filing date of the earliest U.S. non-provisional application, can drive business and investment strategies, dictate allocation of technological resources, and impact financial valuations.

In certain industries, such as pharmaceuticals and biotechnology, companies can often spend well north of a billion dollars to develop a new drug, with some estimates setting the average cost at over $2.5 billion. When taking into account the length of time (as well as costs) associated with prosecuting a patent application to issuance of a patent, as well as clinical trials, FDA approval, bringing the drug to market, and various other obstacles, the average drug may hit the market 12 to 15 years into its 20-year patent term. As a result, companies seek to ensure that they accrue all the patent term to which they are entitled under the current patent rules, conscious of competitors that are striving to bring competing products to market as soon as the patent term expires. These companies are keenly aware that every day their patent is in force can be worthmillions of dollars in additional revenue.

Recognizing the investment and value that some patent applicants ascribe to their patents, lawmakers acknowledged that applicants should not be punished for unforeseen delays due to USPTO error or a backlog of applications. As a result, Congress passed the patent term adjustment (“PTA”) statute in 1999 to discourage delays in the patent application process. The statute, 35 U.S.C. § 154(b), allows the USPTO to adjust the patent term of a patent by adding time to the 20 year current patent term to account for delays caused by the USPTO, but also allows the USPTO to reduce the patent term of a patent to account for delays that are caused by the applicant.

35 U.S.C. § 154(b)(1) outlines three types of delays caused by the USPTO, such as: failure to provide a notification of examination, e.g., an Office Action or a Notice of Allowance, within 14 months of an application’s filing; failure to issue a patent after three years have passed between the filing date of the application and the date of allowance; and delays caused by appeals and/or derivation proceedings, among others. For these delays, the term of a patent is extended one day for each day of delay beyond the specified periods. Conversely, § 154(b)(2)(C) allows the USPTO to reduce the total amount of PTA delays by deducting the number of days equal to the time period that the applicant failed to engage in reasonable efforts to conclude prosecution of the application. Examples of such delays are detailed in the statute and include a failure to respond to a notice of rejection, objection, argument, or other request from the USPTO within three months from the date of the USPTO action or request. In addition, PTA can be reduced under this section based on any regulations prescribed by the Director of the USPTO to establish “circumstances that constitute a failure of an applicant to engage in reasonable efforts to conclude processing or examination of an application.”

PTA pursuant to this statute was the subject of the suit in recent case, Supernus Pharmaceuticals, Inc. v. Iancu, in which the Federal Circuit reversed the district court’s judgment in favor of the USPTO, finding that the patent term adjustment was improperly reduced. The regulation in question included 37 C.F.R. § 1.704(c)(8), which regulates the calculation for reduction of PTA in instances where an applicant submits a supplemental paper to the USPTO.

Supernus, the owner and assignee of the patent-at-issue, filed a Request for Continued Examination (“RCE”) on February 22, 2011 to remove the finality of a rejection during prosecution of U.S. Patent Application No 11/412,100 (“the ‘100 application”) and for consideration of additional information. On August 21, 2012, the EPO notified Supernus’ European Counsel that a Notice of Opposition was filed by Sandoz in an international application that claimed priority to the ‘100 application, and Supernus’ European Counsel informed Supernus of the EPO notification on September 11, 2012. On November 29, 2012—seventy-nine days after being informed or 100 days after the EPO notification of the Sandoz Opposition—Supernus submitted a supplemental IDS to the USPTO to inform them of the opposition and the documents submitted therein. After another round of prosecution, the USPTO issued a Notice of Allowance on February 4, 2014, and the ‘100 application issued as U.S. Patent No. 8,747,897 (“the ‘897 patent”) with a Patent Term Adjustment of 1,260 days.

In calculating PTA, the USPTO attributed 2,321 days to USPTO delay: 1,656 days for the USPTO’s failure to meet the mandated statutory response deadlines and 665 days for the USPTO’s failure to issue the patent within three years of the application’s filing date. The USPTO also determined that PTA should be reduced by 886 days of applicant delay, to arrive at a total of 1,260 days of PTA. A detailed timeline of events is reproduced for reference below: 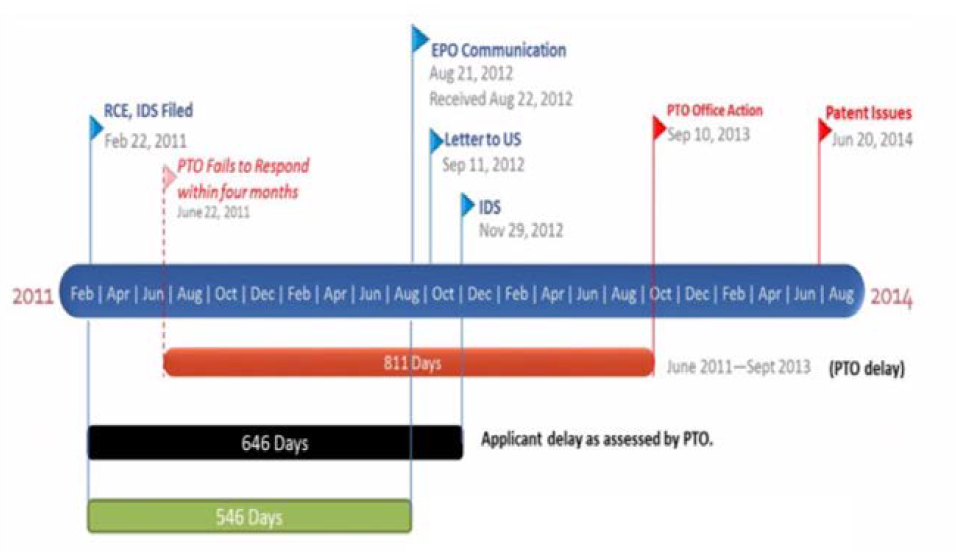 In response to the USPTO’s determination of PTA, Supernus filed a Request for Reconsideration of Patent Term Adjustment arguing that the 646-day reduction between the RCE and IDS filing on February 22, 2011 and the supplemental IDS filing on November 29, 2012 was improper. Supernus contended that 37 C.F.R. § 1.704(c)(6) should apply to post-RCE submissions, not 37 C.F.R. § 1.704(c)(8). Supernus argued that, of the 646-day period for reduction of PTA, Supernus was entitled to at least 546 of those days for the time period spanning between February 22, 2011, when the RCE and IDS were filed, and August 22, 2012, when the EPO notified their European Patent Counsel of the Sandoz opposition.

The Federal Circuit ruled in favor of Supernus, finding that Supernus could not have undertaken any efforts to conclude prosecution of the ‘100 application during the 546-day period between February 22, 2011 and August 22, 2012. Citing the PTA statute, 35 U.S.C. § 154(b)(2)(C)(i), the Federal Circuit found that Congress intended to reduce PTA by a period equal to the period of time during which the applicant failed to engage in reasonable efforts to conclude prosecution of the application, and thus applicant’s PTA can only be reduced by the period of time during which such efforts were not undertaken. From the time the RCE and IDS were filed on February 22, 2012 until August 21, 2012, the day prior to receipt of the Notice of Opposition filed by Sandoz, there were no efforts—much less reasonable efforts—that the applicant could have engaged in to conclude prosecution of the application. To hold otherwise would unfairly penalize applicant and fail to protect the patent term to which Supernus is entitled.

In finding in favor of Supernus, the Federal Circuit distinguished the holding in Gilead Sciences, Inc. v. Lee, which found that 37 C.F.R. § 1.704(c)(8) encompasses the filing of a supplemental IDS in the calculated delay period and is reasonable as it applies to PTA. Specifically, in Gilead, the court found that in the PTA statute, Congress intended to sanction not only applicant conduct or behavior that results in actual delay, but also those having the potential to result in delay irrespective of whether such delay actually occurred. The court in the instant case reasoned that the issue in Gilead was whether a failure to engage in reasonable efforts requires conduct that actually causes a delay. Although no actual delay resulted in Gilead, the potential to cause delay by failing to submit the supplemental IDS in a more timely manner was deemed to be sufficiently reasonable, in light of the statute, to result in a reduction of PTA. The issue in this case, which was to decide whether the USPTO may reduce PTA by a period that exceeds the time during which the applicant failed to engage in reasonable efforts to conclude prosecution, was deemed to be different from Gilead, therefore justifying the existence of a seemingly opposite conclusion.

Given the possibility of the existence of PTA in one’s patent, an incorrect determination of PTA by the USPTO, and the potential value extending one’s patent term, patent applicants are encouraged to always review the USPTO’s determination of the PTA in their granted patents. Too often the USPTO’s calculation of PTA is treated as gospel and assumed to be accurate by applicants, only to discover much too late that they were entitled to a greater patent term. Further, in an effort to prevent reductions to PTA and allow themselves to gain the full advantage of PTA that accrues as a result of patent office delays, applicants are encouraged to timely file any references or documents that may be material to the patentability of the application to facilitate conclusion of prosecution of the application. Applicants are also encouraged to refrain from taking extensions when responding to rejections in the time allotted by the patent laws, when possible, and to keep apprised of the regulations promulgated by the Director of the USPTO.