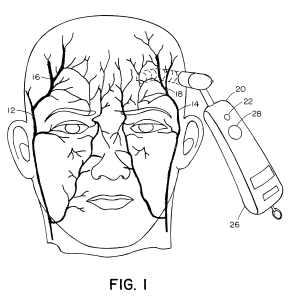 On August 28 and September 15, 2015, certain asserted claims of Exergen’s United States Patent No. 7,787,938 (the "'938 patent") were found invalid under 35 U.S.C. § 101 on two separate summary judgment motions. See Exergen Corp. v. Brooklands Inc. ("Brooklands"), No. 12-cv-12243-DPW (August 28, 2015) and Exergen Corp. v. Thermomedics, Inc. ("Thermomedics"), No. 13-cv-11243-DJC (September 15, 2015). The claims of the '938 patent at issue are directed to diagnostic methods for measuring body temperature based upon radiation and temperature measurements taken at the temporal artery at the side of the forehead. Readers, particularly with children, will recognize the Exergen thermometer as a popular tool for taking kids’ temperatures.

According to Exergen, prior to Exergen’s invention, high-accuracy forehead thermometers were not available because of the challenges presented by the forehead’s exposure to varying ambient air temperatures. The '938 patent claims methods that implement mathematical formulas for converting certain measurements into a skin surface temperature reading that is converted into an approximation of the subject’s core body temperature, taking into account the ambient air temperature. Independent claims 51 and 54 are illustrative:

In the earlier of the two decisions, Brooklands, Judge Woodlock concluded that these claims contain two steps: the "'measuring' step, which involves measuring temperature or radiation at the skin of the forehead, and the 'processing' step, which involves taking the data from the 'measuring' step and a mathematical formula that uses heat transfer principles to result in an output, an approximate core body temperature." Judge Woodlock concluded that these two steps resulted in patent-ineligible subject matter under Mayo because they are the application of a law of nature using well-understood, routine, or conventional steps.

In the later decision, Thermomedics, Judge Casper agrees with the conclusion reached in Brooklands that claims 51 and 54 recite patent-ineligible subject matter, and further concludes that their respective dependent claims 52 and 55 are also patent-ineligible. Both decisions provide an extensive background on the development of § 101 case law, including references to Gottschalk v. Benson from 1972 (holding that "[p]henomena of nature, though just discovered, mental processes, and abstract intellectual concepts are not patentable, as they are the basic tools of scientific and technological work"); Parker v. Flook in 1978 (holding that even though a phenomenon of nature or mathematical formula may be well known, an inventive application of the principle may be patented; conversely, the discovery of such a phenomenon cannot support a patent unless there is some other inventive concept in its application); Diamond v. Diehr in 1981 (holding that "a new combination of steps in a process may be patentable even though all the constituents of the combination were well known and in common use before the combination was made"); Mayo Collaborative Servs. v. Prometheus Labs., Inc. in 2012 (finding diagnostic claims patent ineligible for being directed to a law of nature); Ass'n for Molecular Pathology v. Myriad Genetics, Inc. in 2013 (finding isolated DNA sequences ineligible for patent protection, but finding cDNA patent eligible subject matter for being distinguishable from natural DNA); Alice Corp. Pty. Ltd. v. CLS Bank Int'l in 2014 (finding system and method claims for mitigating “settlement risk” in financial transaction patent ineligible for being directed to an abstract idea); and even the recent holding earlier this year (2015) in Ariosa Diagnostics, Inc. v. Sequenom, Inc. (finding diagnostic claims patent ineligible for being directed to a non-transformative use of a naturally occurring phenomenon).

With respect to the second, inventive concept step of the § 101 inquiry, both courts formulated the inquiry to be the same as in Mayo: whether the "claims add enough to their statement of the [natural laws and phenomena] to allow the processes they describe to qualify as patent-eligible processes that apply natural laws?" Both judges found that the only additional step added to this law of nature is taking a measurement of temperature or radiation at the forehead, which they deemed to be a conventional, straightforward process.

After discussing Diehr, Mayo, and Flook, Judge Woodlock distinguished this case from Diehr, finding that "[u]nlike in Diehr, the formula [here] is not used to affect a physical transformation." Thus, the "additional step of measuring the surface skin of the forehead is a necessary, conventional step involving collecting the data needed to be plugged into the mathematical equations in the processing step."

Thus, Brooklands and Thermomedics continue the contemporary trend towards limiting diagnostic method patents that employ natural laws and phenomena using steps that can be considered "routine" or "conventional." Notably, Judge Woodlock makes a further distinction based upon whether or not a method employs a "physical transformation," suggesting that those that do not are especially susceptible to being invalidated under § 101. Parties asserting, defending, or otherwise evaluating diagnostic method patents should heed this vulnerability.