“Infringement, whether direct or contributory, is essentially a tort,

and implies invasion of some right of the patentee.” 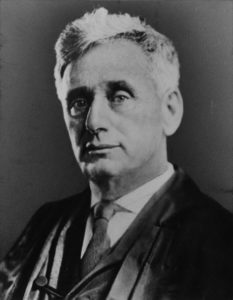 Louis D. Brandeis took his seat on the bench of the United States Supreme Court for the first time on Monday, October 9, 1916. That opening day of the new term included the swearing in of Associate Justice John H. Clark and oral argument on several motions. It also marked the beginning of Justice Brandeis’s twenty-three-year tenure (1916-1939) on the high court, which is now considered one of the most important in American jurisprudence. Justice Brandeis was not only the first Jewish jurist to sit on the Supreme Court, but he impressed upon his colleagues that the law had to reflect economic and societal realities. In essence, he brought the principles that guided him in the practice of law to the bench.

Nutter was co-founded by Justice Brandeis in 1879 and his legacy continues as a source of pride and inspiration for us today. To honor the hundredth anniversary of Justice Brandeis’s first session, we have summarized several of the patent opinions he authored below.

In Carbice Corp. of America v. American Patents Dev. Corp., the patentee brought an infringement suit for the sale of solid carbon dioxide.  The patent-in-suit, U.S. Patent No. 1,595,426, disclosed a “refrigerating transportation package.” The claimed package called for a specific structure whereby solid carbon dioxide, or “dry ice,” is placed in the center of the box and surrounded by foodstuffs—namely ice cream. In describing the effects of this structure, Justice Brandeis stated, “[t]he ice cream is kept frozen by both the solid and the gaseous dioxide.”

Importantly, the patent did not claim dry ice, as it was well known at the time of the invention. It claimed “a particular kind of packaging employing solid carbon dioxide in a new combination.” Nevertheless, the patentee sued the Carbice Corporation for contributory infringement, alleging that it sold the dry ice with the knowledge that it would be used in packages like that claimed in the patent. There was no dispute that the unpatented dry ice is a necessary element of the patented product. Justice Brandies, however, found that the patent-in-suit did not give the patentee the right to be free from competition in the sale of dry ice. He wrote, “[c]ontrol over the supply of such unpatented material is beyond the scope of the patentee’s monopoly.” He found the patentee’s attempt to monopolize the supply of dry ice via its packaging patent analogous to the restraints against commerce prohibited under the Sherman Act.[1]

Similarly, in Leitch Mfg. Co. v. Barber Co., Justice Brandeis found that a patentee attempted to improperly extend its monopoly to unpatented materials. There, the Barber Company held a method patent that claimed the use of bituminous emulsion as a film on the surface of concrete roadways to prevent evaporation during curing. Barber sued Leitch, a competitor, for contributory infringement because of its sale of bituminous emulsion. The Court recognized bituminous emulsion as a staple article of commerce and found that “the sole purpose to which the patent is put is thereby to suppress competition in the production and sale of staple unpatented material.” Justice Brandeis further went on to issue a broad pronouncement as to patent misuse:

By the rule there declared every use of a patent as a means of obtaining a limited monopoly of unpatented material is prohibited. It applies whether the patent be for a machine, a product, or a process. It applies whatever the nature of the device by which the owner of the patent seeks to effect such unauthorized extension of the monopoly.

The holdings of Carbice and Leitch—and their progeny—were largely viewed as both an expansion of the patent misuse doctrine and the gutting of contributory infringement. When Congress codified these doctrines in 1952 as 35 U.S.C § 271, Justice Brandeis’s decisions were expressly considered. For example, the legislative history reveals that the “staple article” and “substantial noninfringing uses” language contained in § 271(c) was adopted to ensure that the practices condemned in Carbice and Leitch were not sanctioned in reviving the contributory infringement doctrine.

As recently as 2006, a patentee attempted to utilize the reasoning in Union Tool to argue that he was entitled to additional damages for infringement. In Glenayre Electronics Inc. v. Jackson, the patentee argued to the United States Court of Appeals for the Federal Circuit that he did not receive full compensation for infringement because he was not compensated for customers’ use of his patented voicemail server system. But in Union Tool, the patentee received only an injunction and no compensation. Judge Prost wrote, “[I]n stark contrast to the facts of . . . Union Tool, here Jackson has already received actual damages for the manufacture and sale of infringing devices which explicitly were a measure of the royalty for full rights in the patent . . . . He therefore, as a matter of law, has licensed the use of those products . . . .”

Restrictive Licenses Lawful:  In 1938, the Supreme Court decided General Talking Pictures Corp. v. Western Elec. Co. There, patents related to “vacuum tube amplifiers” were licensed to American Transformer Company (ATC). ATC’s license, however, was limited to private or home use in connection with radio applications. It did not include use for “commercial sound recording and reproducing, which embraces talking picture equipment for theatres.” Despite the restrictions in the license, ATC sold amplifiers to General Talking Pictures Corp. (Pictures Corp.). In addition, Pictures Corp. ordered the amplifiers and purchased them knowing that [ATC] had not been licensed to make or sell them for such use in theatres.” Justice Brandeis concluded that Pictures Corp. was in no better position than ATC with respect to infringement. In effect there was no license to ATC with respect to the sales to Pictures Corp. and, therefore, Pictures Corp. “is liable because it has used the invention without license to do so.”

Indefiniteness:  Justice Brandeis’s decision in Permutit Co. v. Graver Corp., is one of the early cases in the twentieth century where the validity of a patent was considered vis-à-vis the definiteness requirement.

The Permutit Co. owned a patent—U.S. Patent No. 1,195,923—for a device for softening water. It used zeolites, which give up their sodium to the water and filter out calcium and magnesium. Zeolites were well-known at the time of the invention, but were expensive to mine and not well-adapted for use in water filters. During litigation, Permutit claimed that the invention was directed to a filtering device that included zeolites and allowed them to be regenerated therein. Accordingly, there needed to be an open space in the device above the zeolites so as to enable them to rise and reform. Justice Brandeis summarized, “[t]he invention relied upon consists [of] removing the close fitting cover from the zeolite bed and in providing adequate rising space by placing the screen at some distance above the top of the layer of zeolites.” But these two things were not described in the claims or the specification. The Court, therefore, held the patent invalid. Justice Brandies wrote:

The statute requires the patentee not only to explain the principle of his apparatus and to describe it in such terms that any person skilled in the art to which it appertains may construct and use it after the expiration of the patent, but also to inform the public during the life of the patent of the limits of the monopoly asserted, so that it may be known which features may be safely used or manufactured without a license and which may not.

This pronouncement resonates today. It reflects the very policy that animated the Supreme Court’s holding in Nautilus, Inc. v. Biosig Instruments, Inc., adopting a stricter standard for indefiniteness that focuses on the intrinsic evidence.

Our friends upstairs at Foley Hoag have also paid tribute to Justice Brandeis’s legacy this week by discussing his trademark and copyright cases on their Trademark and Copyright Law Blog.