5 Patent Law Petitions to Watch at the Supreme Court
05.28.2019
Posted in Litigation, Patents, Rules and Regulations 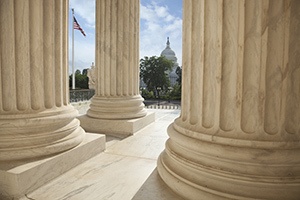 As the 2018-2019 Supreme Court term nears its end, several consequential patent law petitions still await certiorari rulings before the Justices recess for the summer, while other patent cases are scheduled to be briefed and ready for oral argument when the Court reconvenes for a new term in October. To mark the end of this term, here’s a list of 5 Patent Law Petitions to Watch at the Supreme Court as we look ahead to 2019-2020.

In the proceedings below, RPX filed a Federal Circuit appeal of the PTAB’s final written decision in the inter partes review (IPR) that it requested. The Federal Circuit denied RPX’s appeal for lack of standing because RPX had not been accused of infringing Chanbond’s patent and was “not engaged in any activity that would give rise to a possible infringement suit.” In its petition to the Supreme Court, RPX argued that the Federal Circuit’s finding, that the only injury sufficient to confer standing on an IPR petitioner is a patent-inflicted injury, conflicts with the America Invents Act and Supreme Court precedent regarding the power of Congress to enable a party to satisfy Article III standing by statute.

Although the Supreme Court hasn’t granted certiorari of RPX’s petition yet, it has signaled interest in this petition by asking the Solicitor General to brief the government’s position on this issue. On May 9, 2019, the Solicitor General filed its brief urging the Court to deny RPX’s petition. It argued that the right to initiate an appeal from the PTAB’s final written decision in an IPR is conferred not on “any party to the inter partes review,” but on “a party dissatisfied with the final written decision of the Board” (see 35 U.S.C. § 319) and that to prevent that prerequisite from being superfluous, the term “dissatisfied with” should be construed to mean “aggrieved by” or “injured by.” Thus, the government maintains that a petitioner can only invoke the jurisdiction of the Federal Circuit in an appeal from a final written decision if the petitioner can show that it will suffer concrete injury from the existence of the challenged patent.

Abbreviated Question Presented: Does an unsuccessful patent applicant have to pay the United States Patent and Trademark Office’s (PTO) attorneys’ fees if it challenges the rejection of its patent application in court?

According to 35 U.S.C. §145, an unsuccessful patent applicant must pay “all expenses of the proceedings” when seeking district court judicial review of the PTO’s rejection of a patent application. But what constitutes “expenses” under Section 145? The Solicitor General, on behalf of the PTO Director, petitioned for writ of certiorari for review of this very question.

This case arises from the District Court’s denial of reimbursement of the PTO’s attorneys’ fees associated with defending the agency’s rejection of NantKwest’s patent application. A divided Federal Circuit panel reversed the District Court’s decision and granted attorneys’ fees to the PTO. Acting sua sponte, the en banc Federal Circuit vacated the panel opinion, reheard the case, and decided in a 7-4 decision that the term “expenses” in Section 145 does not include the PTO’s attorneys’ fees. The Supreme Court granted certiorari on March 2 of this year and briefing is scheduled to be completed later this summer, on August 14.

Abbreviated Question Presented: When are IPRs time-barred and are such determinations appealable?

Two provisions of the America Invents Act related to inter partes review have been interpreted by a divided Federal Circuit sitting en banc. First, 35 U.S.C. § 315(b) provides that “[a]n inter partes review may not be instituted if the petition requesting the proceeding is filed more than 1 year after the date on which the petitioner … is served with a complaint alleging infringement of the patent.” Second, 35 U.S.C. § 314(d) provides that “[t]he determination by the Director whether to institute an inter partes review under this section shall be final and nonappealable.”

In a recent case, Wi-Fi One, LLC v. Broadcom Corp., 878 F.3d 1364 (Fed. Cir. 2018), the en banc Federal Circuit held (with four dissenters) that, notwithstanding § 314(d), a PTAB decision to institute an IPR after finding that the § 315(b) time bar did not apply was appealable. Applying its decision in Wi-Fi One, the Federal Circuit agreed to hear Click-to-Call’s appeal of the PTAB’s decision to institute Dex Media’s requested IPR as timely under § 315(b).

Reversing the PTAB, the en banc Federal Circuit, again divided (with two dissenters), held that Dex Media was time barred from requesting an IPR because a predecessor entity had served a patent infringement complaint, that was later dismissed without prejudice, more than one year before Dex Media filed its IPR.

Dex Media’s instant petition asks the Supreme Court: 1) Whether 35 U.S.C. § 314(d) permits appeal of the PTAB’s decision to institute an IPR upon finding that § 315(b)’s time bar did not apply; and 2) Whether 35 U.S.C. § 315(b) bars institution of an IPR when the previously served patent infringement complaint, filed more than one year before the IPR petition, had been dismissed without prejudice.

Abbreviated Question Presented: What circuit court has jurisdiction over appeals related to violations of Section 2 of the Sherman Act arising from fraud in the patent procurement process?

The 1965 Supreme Court case Walker Process Equipment, Inc. v. Food Machinery & Chemical, 382 U.S. 172, held that “the enforcement of a patent procured by fraud on the Patent Office may be violative of § 2 of the Sherman Act provided the other elements necessary to a § 2 case are present.” Here, petitioner Xitronix filed a Walker Process suit against respondent KLA-Tencor, alleging violation of antitrust laws by fraudulently obtaining a patent. After the District Court granted summary judgment to KLA-Tencor, Xitronix appealed to the Federal Circuit.

In the underlying case, the Federal Circuit found Investpic’s process inventive, novel, and nonobvious under the Patent Act, but held that the process was “abstract” and patent-ineligible because it must be performed by a computer, and thus, does not occur in the “physical realm.”

Investpic’s petition urges the Supreme Court to review the Federal Circuit’s “physical realm” requirement for patents claiming abstract ideas because, it argues, this requirement is not found in the Supreme Court’s precedent. Investpic claims that the Federal Circuit has legislated new exceptions to patentability detached from any basis in statute, case law, or principle instead of evaluating whether a claimed invention is likely to be preemptive and inhibit innovation. The petition criticizes the Federal Circuit’s interpretation of Alice Corp. Pty. Ltd. v. CLS Bank Int’l, 573 U.S. 208 (2014) as “single-mindedly” focusing on what constitutes an “abstract idea” and “something more” and losing sight of the foundational principle underlying Alice and 165 years of precedent: the need to avoid preempting future innovation. To date, six amicus briefs have been filed in support of Investpic’s petition.