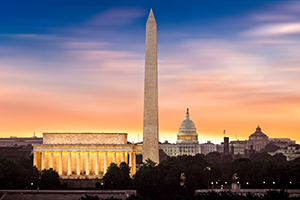 Non-compete reform has continued apace in the Northeast as President Biden has expressed interest in a federal law impacting the use of non-competes. As a candidate, President Biden promised to “eliminate non-compete agreements, except the very few that are absolutely necessary to protect a narrowly defined category of trade secrets….” We have not heard from the administration as to whether there will be any attempted movement in that direction. However, as we have reported here, and here, and here, states in the Northeast have increasingly moved to restrict non-compete agreements. Now, the District of Columbia has enacted sweeping non-compete legislation surpassing any recent statutes in the Northeast, akin to the broad bans in California, North Dakota, and Oklahoma.

On January 11, 2021, Mayor Muriel Bowser signed the Ban on Non-Compete Agreements Amendment Act of 2020 (the “Act”). Barring resistance from Congress, the Act will go into effect on or about March 19, 2021. With few limited exceptions, the Act will wholly prohibit noncompete agreements in the District and represents the broadest ban in the Northeast. However, the non-compete ban is not retroactive; it applies only to non-compete agreements entered into after the Act’s effective date. Any agreement with a non-compete provision entered into after the Act goes into effect will be void.

Perhaps most notable, the Act prohibits both in-term and post-employment non-competes. While the Act does not apply to non-competes entered into before the Act’s effective date, it is retroactive as applied to pre-existing workplace policies. D.C. employers must now review and revise existing workplace policies to comply with the Act’s requirements. Specifically, the Act forbids private employers from maintaining heretofore common workplace policies that prohibit an employee from (1) being employed by another person; (2) performing work or providing services for pay for another person; or (3) operating the employee’s own business while employed by the employer.

Further, unlike many noncompete prohibitions in the Northeast, the Act does not limit its prohibition to non-competes with low-wage workers. Rather, the Act covers most employees who work, or are reasonably likely to work, for an employer in D.C. However, many questions remain: “employer” is defined in part as any business “operating in” the District, but the Act does not define “operating.” Moreover, the Act is silent as to any threshold amount of work or physical presence requirements, so absent further guidance, the Act may cover individuals performing even minimal remote work in the District for out-of-state employers. And, while the Act explicitly excludes non-disclosure or confidentiality agreements and non-competes entered into in connection with the sale of a business from its requirements, it does not specifically exclude non-solicitation agreements.  We will keep an eye out for forthcoming implementing rules issued by the District’s mayor on these issues.

Pursuant to the Act, all covered employers are required to provide written notice of the Act’s provisions to employees on three separate occasions: (1) 90 calendar days after the Act becomes effective; (2) 70 calendar days after an individual becomes an employee; and (3) 14 calendar days after receiving a written request for notice from the employee. Further, employers may not retaliate or threaten to retaliate against an employee who fails to comply with an unlawful non-compete provision or workplace policy, complains about a non-compete provision reasonably believed to be unlawful, or requests a copy of the employer-mandated notice.

Finally, the Act contains a myriad of enforcement provisions that subject non-compliant employers to increasing financial penalties per worker and provides a private right of action to aggrieved employees.

While other nearby states have opted for more limited non-compete reform—such as notice requirements, banning non-competes for low-wage or exempt workers or for laid off workers, or requiring “garden leave” payments during the restricted period—D.C.’s legislation is the first outright ban of non-compete agreements on the East Coast.