Revised Guidance is a Promising Step for Subject Matter Eligibility Examination
By Thomas J. Tuytschaevers on 01.28.2019
Posted in Patents, Rules and Regulations

Bob Dylan famously sang that “[y]ou don’t need a weatherman to know which way the wind blows,” and we don’t need a weatherman to tell us that the wind now blows differently at the United States Patent and Trademark Office (USPTO). On January 7, 2019, the USPTO released revised subject matter eligibility examination guidance (“Guidance”), foreshadowed by USPTO Director Iancu last fall. The Guidance is noteworthy both for raising the bar in examination procedure and, we think, for signaling the Office’s intent to rein-in the application of subject matter ineligibility analysis (“lest it swallow all of patent law” – Alice). We anticipate a reduction in subject matter eligibility rejections because the Guidance makes it more difficult for examiners to reject claims as being directed to unpatentable subject matter under 35 U.S.C. §101.

Our version of an updated subject matter eligibility test flow chart, modeled on previous USPTO flow charts, is below. 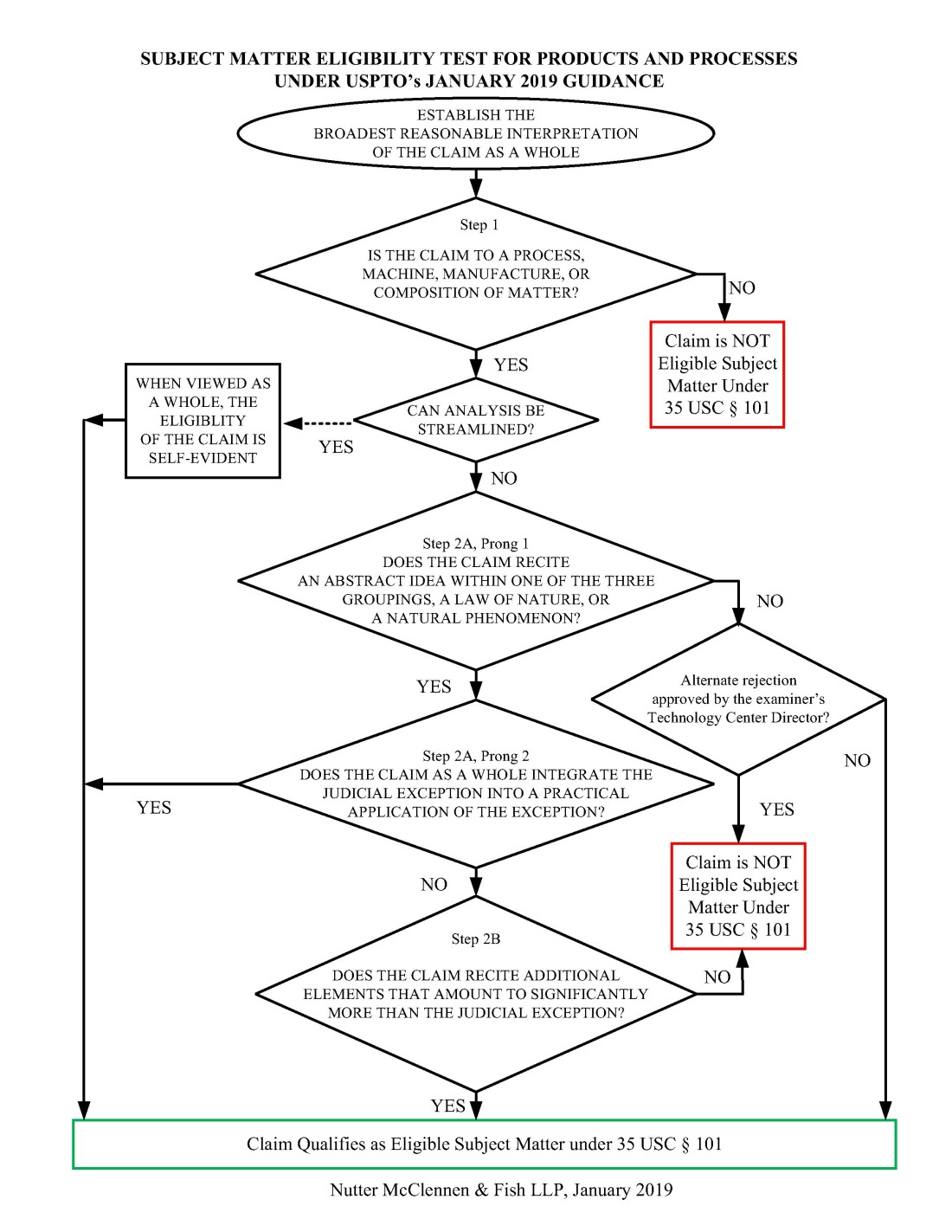 More specifically, determining that a claim recites an abstract idea now requires the examiner to (a) identify the specific limitations in the claim that recite the abstract idea, and (b) determine whether those limitations fall within any of three identified “groupings” of abstract ideas: (i) mathematical concepts – e.g., mathematic relationships, mathematical formulas or equations, mathematical calculations; (ii) certain methods of organizing human activity – e.g., fundamental economic principles or practices, commercial or legal interactions, managing personal behavior or relationships, and (iii) mental processes – e.g., concepts performed in the human mind.  Importantly, when evaluating potential abstract ideas under Prong 1, examiners are no longer to make reference to the USPTO’s Eligibility Quick Reference Sheet Identifying Abstract Ideas, which has been expressly superseded by the Guidance.

If the claim does not recite a law of nature, a natural phenomenon, or an abstract idea within one of the three groupings, then, with one noteworthy exception for abstract ideas,[1] the claim is not “directed to” a judicial exception under Step 2A, and is patent eligible.  Otherwise,  the analysis proceeds to Prong 2.

Considerations favoring eligibility include[2], for example, elements that reflect “an improvement in the functioning of a computer, or an improvement to other technology or technical field,” or that “effect a particular treatment or prophylaxis for disease or medical condition.”

In contrast, the claim is ineligible under Prong 2 (and hence under Step 2A of the Alice/Mayo test) if those additional elements merely apply the judicial exception, e.g., on a computer; merely add “insignificant extra-solution activity;” or merely “link the use of a judicial exception to a particular technologic environment or field of use.”  In this case, analysis continues with Step 2B of the Alice/Mayo test, which will be the subject of a future Nutter article.

A cause for optimism
We are encouraged that the USPTO recognizes problems with previous subject matter eligibility examination and are confident that the Guidance places new hurdles in the path of examiners looking to reject claims as being directed to patent-ineligible subject matter.  The Guidance provides applicants with new weapons to fight such rejections.  Nevertheless, we caution that examiners still have wide latitude to make several outcome-influencing determinations, such as which claim elements fall within an alleged judicial exception, whether there are additional elements beyond a judicial exception, whether the claim integrates a judicial exception into a practical application, and whether there is a meaningful limit on the judicial exception.  We hope that examiners, in exercising their discretion, will bear in mind the direction of the prevailing winds.  Overall, the Guidance represents a positive development that should make rejections under 35 U.S.C. 101 the exception rather than the rule.

[1] The exception is that, for abstract ideas, the Guidance allows the examiner to craft a subject matter eligibility rejection in other ways, but that rejection must be approved by the examiner’s Technology Center Director.  The Guidance suggests that such rejections will arise only in “rare circumstances.”  We infer from this that the Office intends to make subject matter eligibility evaluations more rigorous, and rejections probably less frequent.