Patents or Trade Secrets? Deciding How Best to Protect Your Invention Part I: Can The Invention be Kept Secret?
10.10.2017
Posted in Branding, Copyright, Patents, Rules and Regulations, Trademarks 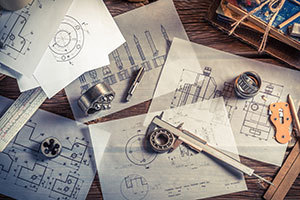 Key Takeaway: One critical question to ask when deciding whether to protect your invention using patents or trade secrets is how well the invention can be kept secret. Ease of reverse-engineering, risk of independent duplicate creation, and the ease of maintaining the invention secret in a commercial setting are factors that should be considered.

Distinctions between Patents and Trade Secrets

Important differences between patents and trade secrets are summarized in the table below:

Factors to Consider When Weighing Patents and Trade Secrets

Whether an invention should be protected by a patent or a trade secret depends on numerous criteria. At a minimum, the invention must be one that can be kept secret. In addition, business needs of the invention’s owner as well as policy and/or ethical consideration must also be considered. See flowchart below: 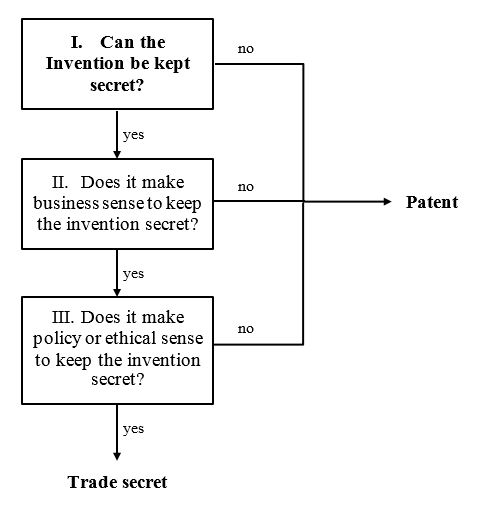 I. Can the Invention Be Kept Secret?

Some inventions are better suited for trade secret protection than others. Three considerations in determination of whether an invention can be kept secret include:

1. Ease of reverse-engineering the invention

Trade secrets are not appropriate for inventions that can be easily reverse-engineered. For example, simple mechanical inventions[2] generally cannot be kept a secret because the key features of the invention are apparent to the users. Even complex mechanical or electronic devices can be reverse-engineered by product teardown.

In contrast, other inventions such as composition (e.g., secret formula or recipe) or process (e.g., process for manufacturing a composition) type inventions can be kept secret because of the difficulty in reverse-engineering the invention from the final product.[3]

Trade secrets may not be appropriate where multiple parties may be competing to be the first to develop similar solutions to a problem because of the risk that more than one party may independently develop the same invention.[4] Unlike patents, trade secrets do not provide protection against independent duplicative inventions.

3. Ability to guard the core knowledge of the invention while scaling up

Maintaining a trade secret becomes more challenging as the business grows. For example, as production and distribution of an invention are scaled up and/or outsourced, more parties are likely to become privy to the trade secret. In other words, as the invention’s owner scales up its commercial activity, the ability to maintain the core knowledge of the invention among a small and manageable number of key stakeholders may become more challenging.[5] This analysis is likely to change as the business evolves, thus overlapping with the second on the topic, “Part II: Does it make business sense to keep the invention secret?”

Stay tuned for our follow-up blog post on relevant business considerations when deciding whether to protect your invention using a patent or a trade secret.

[3] A canonical example of such invention is the secret formula for Coca Cola, which has remained a trade secret for over a century.

[4] Gottlieb Daimler and Karl Benz independently invented the gasoline engine powered vehicle at about the same time in 1886. See https://www.daimler.com/company/at-a-glance.html.