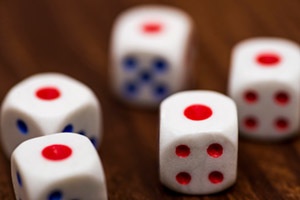 For example, the Federal Circuit recently affirmed a final decision of the Patent Trial and Appeal Board (“Board”) holding a claimed method of playing a dice game using dice having non-conventional markings to be patent ineligible under 35 U.S.C. § 101. See In Re: Marco Guldenaar Holding B.V. (Fed. Cir. 2018). Specifically, the court agreed with the Board that the claimed method recites the abstract idea of “rules for playing a game” and lacked an inventive concept sufficient to transform the claim into patent eligible subject matter.

The claimed method involves providing a set of dice with each die having identical markings on one, two, or three faces of the die, placing a wager that a specific combination of die markings will appear face up, rolling the dice, and paying a payout amount if the wager occurs. In its appeal, the applicant argued that the use of dice having identical markings on one, two, or three die faces is not conventional, and thus the claim recites significantly more than an abstract idea.

In rendering its decision, the Federal Circuit likened the claimed method to a method of conducting a wagering game using a deck of playing cards that was found to be patent ineligible in In Re Smith (Fed. Cir. 2016). In Smith, the court reasoned that “a wagering game is, effectively, a method of exchanging and resolving financial obligations based on probabilities created during distribution of the cards” and that the Supreme Court held such methods to be abstract ideas in Alice. With respect to the applicant’s argument that the use of dice having non-conventional die markings, the court held that such markings constitute printed matter that communicates information (i.e., whether the player has won or lost a wager), and thus is not entitled to patentable weight.

Although the court held the applicant’s claimed dice game to be patent ineligible, the court did not categorically assert that all games are per se unpatentable as abstract ideas. Rather, the court stated that “abstract ideas, including a set of rules for a game, may be patent-eligible if the claims contain an inventive concept…” The court does not give specific examples of inventive concepts sufficient to transform an abstract idea directed to a game into a patent-eligible application. However, the court indicates that conventional gaming activities (e.g., placing a wager, rolling dice, paying a payout amount, shuffling and dealing playing cards, mere implementation on a computer) are insufficient to recite an inventive concept.

These Federal Circuit decisions make clear that games and rules for playing a game can be patented. For example, patents can be obtained to protect the non-conventional features of a game (e.g., a uniquely structured playing surface, improved ergonomic player console, hardware and/or software that improves online game performance). However, these decisions also indicate that patents may be more challenging to obtain patents for aspects of games, e.g., general rules of the game and/or games that are based on conventional gaming activities. In such cases, copyrights, trademarks, and/or design patents may be better suited to protect the intellectual property associated with the game.