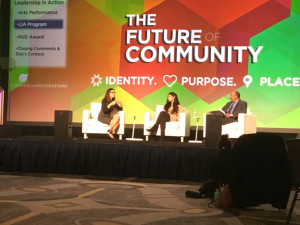 From April 9 to April 12, I had the good fortune to be part of the Council on Foundations 2016 Annual Conference. The Council welcomed nearly 1,400 leaders in the philanthropic sector to Washington, D.C., for plenary programs and concurrent sessions focused on "the Future of Community through the lenses of identity, purpose, and place." Here are four of my biggest takeaways from the Conference:

1. When you want to fill a room to capacity, talk about the Chan Zuckerberg Initiative. One concurrent session was so popular that attendees filled the seats, stood along the walls and sat on the floor. The topic that drew this crowd was "Philanthropy Outside the Tax-Exempt Model." The discussion covered the alternative vehicles for individual and corporate giving, such as public benefit corporations, L3Cs and B-Corp certified companies, which have been embraced by a new generation of philanthropists, most notably Mark Zuckerberg and his wife Dr. Priscilla Chan.

Last December the couple announced the Chan Zuckerberg Initiative and pledged to give 99% of their Facebook shares over their lifetimes to support its mission -- advancing human potential and promoting equality. Most interesting to a room full of foundation folks was that Chan and Zuckerberg formed the Initiative as a limited liability company, rather than as a foundation, because they felt an LLC would provide "the greatest flexibility for the most impact." Like a foundation, the LLC will allow them to support nonprofit organizations and invest in companies aligned with their social mission. But unlike a foundation, the LLC will offer them much wider latitude for their investment activity and -- here's what may have been the clincher -- allow them to participate in policy debates around their social goals.

The biggest aha moment for me came during the discussion about taxes. Chan and Zuckerberg made a point of saying that the Initiative’s structure does not provide them with a tax benefit, other than that they will be eligible for a tax deduction when the LLC makes any donation to a nonprofit organization. It seems the new generation of philanthropists might view taxes differently than all the generations before them. For them, minimizing taxes is not necessarily a driving force. In fact, some in this generation are asking: if paying taxes can be viewed as contributing funds that work to improve the human condition in some cases, isn't a tax deduction antithetical to putting the most resources toward making positive change?  Mind = blown.

2. MRIs and PRIs finally have some momentum. In an earlier blog post regarding IRS Notice 2015-62, we explained "mission-related investments" or MRIs and "program-related investments" or PRIs.  We made the point then that these strategies were trending in the press and at sector conferences, but most foundation directors and trustees had yet to jump on the bandwagon. During the pre-conference session on impact investing, I got the sense the landscape is finally shifting. No longer was there much talk about the "why's" of MRIs and PRIs; instead, the focus was on the "how's" of incorporating them into a foundation's operations.  Below are a few key points from the discussion.

First, performance. Tom Mitchell, Managing Director at Cambridge Associates, acknowledged that, in the initial stages of the development of impact investing, it was plagued by performance stigma. With innovations in technology, an increase in disclosure and more institutions incorporating the approach, impact investing has evolved. Over 140 of his firm's clients are pursuing MRIs, with the largest percentage (35%) being foundations. What is driving MRI investors currently?  In his view, consistency with values, change and impact, constituent concerns (especially for community foundations) and improved performance. For example, in emerging markets, an ESG portfolio has been more resilient than a traditional mix of investments. The performance measurement of private impact funds is just beginning, however.

Second, investing through a financial intermediary. We heard from Jane Henderson, President and CEO of Virginia Community Capital (VCC), a community development financial institution providing a range of credit and financial services to people, businesses and communities not served by mainstream lenders. VCC secured its first PRI in 2011 to support small business lending in economically distressed communities. Other PRIs have followed, including a $1.5 million PRI from the Jessie Ball duPont Fund in 2013 to stimulate economic development. In its ten years of existence, VCC's social returns have included 4,997 jobs created or retained and 7.0 million square feet of business and housing spaces created or rehabbed. We also heard from Sted Garber, Senior Investment Analyst at The Annie E. Casey Foundation, which prefers to invest its social impact dollars through financial intermediaries. Its approach is geared toward leverage and co-investment, with the idea of influencing other investors and sharing risk. The foundation's practice is to be the source of no more than 25% of the capital in a project, except with respect to strategic PRIs.

3. Good governance remains a top priority for the sector. Governance was the subject of multiple sessions. Some sessions focused on the fallout from a failure of proper governance, while others stressed how critical it is for foundations to adhere to the highest standards of governance and for the sector as a whole to regulate itself. One example of self-regulation is the National Standards for U.S. Community Foundations, a peer accreditation program meant to showcase those community foundations that are committed to go above and beyond the requirements of federal and state law to demonstrate accountability and excellence. Eight community foundations in Massachusetts have received the accreditation. Of more interest to family foundations may be Independent Sector's Principles for Good Governance and Ethical Practice. The 33 Principles, last updated in 2015, cover legal compliance and public disclosure, effective governance, strong financial oversight and responsible fundraising.

4. We may be witnessing the next great generation. The young leaders who spoke at the plenary sessions were impressive and inspiring. Each has been able to mobilize his or her community -- whether local or global -- to drive change. Nick Tilsen, Executive Director of Thunder Valley Community Development Corporation, described how the youth in his community on Pine Ridge, one of the poorest in the U.S., have become the innovators and energy behind a new era of community-led economic and social progress defined by entrepreneurship. Maria Teresa Kumar, the founding President and CEO of Voto Latino, which has helped mobilize millions of Latinos in the U.S. and sparked a movement of civically engaged young people, told us of her life's path as an "accidental advocate" galvanized by 9/11, and urged, "We are experiencing the next great generation, but we must give them the tools to thrive." And we heard from Shiza Shahid, the co-founder of the Malala Fund, which was created after Malala Yousafzai, the young Pakistani activist, was shot by the Taliban for her campaign for girls' education. Shiza recalled the moment after Malala's amazing recovery when Malala and her family realized her story could be a catalyst for the movement to educate girls and that they must grab this immediate opportunity to channel the world's outrage in the form of the Malala Fund. Alluding to the many alternatives available for individuals and corporations to make a difference, Shiza challenged us all to "Break down silos...so that we're not living in a world where impact is something only a handful of nonprofits do."