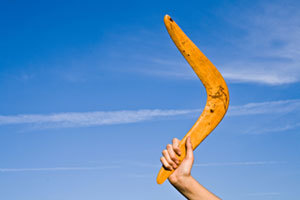 A business plaintiff’s assertion of a Chapter 93A claim could boomerang where the plaintiff moves to dismiss a Chapter 93A counterclaim. That’s a key takeaway from Judge Kaplan’s decision in Microsemi Corp. v. Langlois.

That last point (about Section 11) brings us back to Microsemi.

Microsemi sued its former employee David Langlois. Microsemi alleges that, after his termination from the company, Langlois stole a Microsemi computer and used it to send an email to a Microsemi customer disparaging the company’s product. Langlois hit back in the pleadings. Langlois brought a counterclaim alleging, in substance, “outrage that he was abruptly terminated,” “outrage that he has been accused of stealing the laptop,” and “a belief [that] Microsemi concocted its allegations to try to cause his new employer Solid State Testing, Inc. . . . to fire him, thus depriving Solid State of his services,” according to Judge Kaplan.

Based on their respective allegations, the parties asserted dueling Section 11 claims under Chapter 93A. Microsemi then moved to dismiss the entire counterclaim, including Langlois’s Chapter 93A claim. Judge Kaplan denied that portion of the motion.

He first notes that, according to Langlois, “Microsemi told Solid State . . . that Langlois stole a laptop and trade secrets and intimated that this could result in Solid State being sued if it employed Langlois.” Those allegations, according to Judge Kaplan, are sufficient to state a Chapter 93A claim—but only if the claim “arises out of Langlois, personally, being engaged in trade or business.”

The second part of Judge Kaplan’s analysis focuses on the Section 11 requirement, that is, whether Langlois’s claim arises out of his personal engagement in “trade or business.” Judge Kaplan confesses that “[t]he court is not sure that it does.” But he then writes (emphasis added): “Microsemi has asserted a Chapter 93A, §11 claim against Langlois, so presumably it believes that both it and Langlois are engaged in trade or business in connection with their relationship to one another.” That’s where we see the original Chapter 93A claim boomerang, at least to some degree. Based on Microsemi’s presumed belief that the parties were engaged in trade or business vis-à-vis one another, Judge Kaplan refuses to dismiss Langlois’s claim.