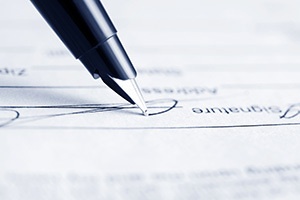 In Caper v. Foley Lardner, LLP, Adam Caper is suing his attorneys, claiming that they committed malpractice, breached their fiduciary duties, made misrepresentations (negligent and intentional), and violated G.L. c. 93A. Caper’s theory is twofold. Caper alleges that his attorneys committed malpractice when they advised him that he could defer salary payments to his business’s chief operating officer. Caper also alleges that his attorneys stopped legal work, focused on refinancing his business, to coerce him to release his malpractice claim.

The law firm moved for summary judgment, arguing that counsel’s work stoppage was a legitimate effort to withdraw from the representation after a conflict arose. Judge Davis denied the motion (but dismissed the negligent misrepresentation count as duplicative of the malpractice count).

First, an attorney cannot compromise a client’s interests to further the attorney’s personal interests. To that end, an attorney cannot stop—or threaten to stop—working on a client’s matter to leverage a settlement of a potential malpractice claim by the client against the attorney, especially where the client is in a vulnerable position. That conduct can constitute not only a breach of fiduciary duty, but also a violation of G.L. c. 93A.

Second, where an attorney wants to withdraw from representing a client, even if based on a perceived conflict of interest, the attorney must comply with Massachusetts Rules of Professional Conduct 1.16(d). Lawyers, according to that rule, must take steps to the extent reasonably practicable to protect a client’s interest. An attorney cannot put "pens down" on the client’s matter without, among other things, giving the client reasonable notice and allowing the client enough time to employ other counsel.

Third, the ruling underscores the legal reality that employers must pay employees their wages earned when due. Wages cannot be deferred to a potential financing of the employer’s business or some other contingency. Being a “start-up” is not a defense. This is particularly important in Massachusetts where the wage laws are punitive and unforgiving.