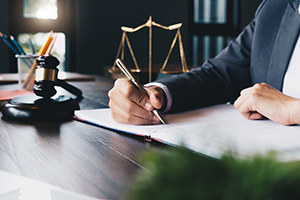 In Bertolino v. Fracassa, Judge Salinger ruled that the advice-of-counsel defense did not insulate Frederick McDonald, a defendant in the case, from liability under the Massachusetts Uniform Securities Act (MUSA), G.L. c. 110A, § 410. McDonald claimed that because he relied on his counsel’s advice to determine what he needed to disclose when soliciting investors, he could not be held liable for failing to disclose material facts to potential investors when he offered and sold membership units in his LLC. Rejecting McDonald’s argument, Judge Salinger reasoned that, because the advice-of-counsel defense is available only “to rebut the scienter element of a crime or civil charge requiring a willful or intentional violation of the law” and “willful or intentional misconduct is not an element of liability under MUSA,” McDonald couldn’t rely on that defense. Judge Salinger also reasoned that, even if the advice-of-counsel defense were viable under MUSA, McDonald proffered no evidence that “he made [a] complete disclosure to counsel, sought advice as to the legality of his conduct, received advice that his conduct was legal, [or] relied on that advice in good faith.”